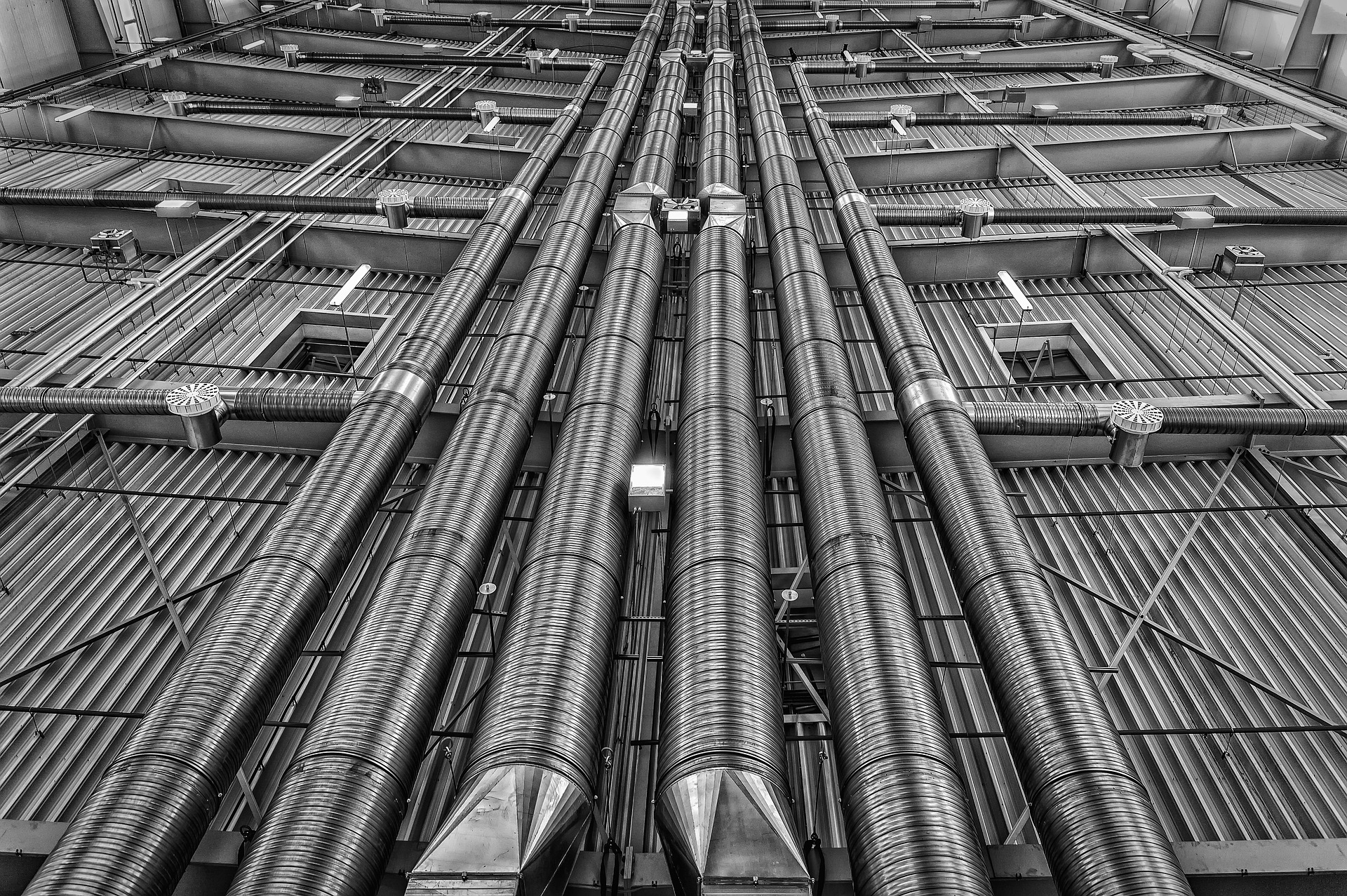 An international global security corporation occupies multiple buildings in what was a 1950s era Air Force base. Each building had its own (sometimes multiple) small central plants with chillers and towers ranging in age from 20 to 40 years. The chillers were not efficient and the maintenance team was constantly repairing or replacing compressors and other components.

As part of the corporate strategy to reduce energy usage at all their facilities, the energy management team took a close look at the cooling systems for this location. They determined that by updating several air handlers and cooling coils, replacing/adding some chilled water piping, and replacing up to nine small central plants with one extremely efficient central plant they could meet their goals of reducing energy use on-site.


Chil-Pak® was called to visit the site and a couple of challenges were quickly apparent. First, there was very little room for a new central plant. The only space available was next to an old blimp hangar but the new packaged central plant could not block the right of way required by emergency vehicles. In order to fit the 945 ton modular central plant into the space available, a compact layout that provided excellent service access to all components was developed and the towers were installed above the new packaged chilled water plant. The modular central plant provided 945 tons of cooling capacity utilizing three Carrier 23XRV chillers. These chillers were chosen over several magnetic bearing alternatives because they were actually more efficient and the variables speed tri-screw compressors were extremely robust.

Due to the complexity of a central chilled water plant there are a number of component choices that ends users, engineers, and contractors can make. As a result of this, one of the first questions that needs to be considered when designing a central chilled water plant is how to balance cost and functionality. There are projects require the most energy efficient chillers, cutting edge adaptive controls for optimized performance, full redundancy on a major component level, etc., but all of these component selections can lead to an increased first cost. Chil-Pak is very familiar with designing and building these customized plants and would be happy to be involved with you on your next project that requires this level of customization. That being said, in order to reduce the cost on projects that require chilled water, but have some level of flexibility from a component standpoint Chil-Pak has developed a standardized product line.

These standardized solutions are single module packaged central plants ranging in size from 180 tons-800 tons. This line of equipment is known as the MARK Series. There are a variety of redundancy configurations available to meet the loads of your facility whether it is a hospital, a data center, resort, hotel, school, manufacturing facility, or other application that could benefit from a chilled water plant.


To learn more about how the Chil-Pak team can assist you on your next project contact hsimmons@chil-pak.com

Chil-Pak offers colocation providers a great opportunity to defer capital on the infrastructure build-out. Rather than tie up multiple millions of dollars in mechanical equipment and hope that the space eventually gets leased out, colocation providers are able to deploy the infrastructure as they grow with the Chil-Pak modular chilled water plant. These systems are manufactured in an ISO 9001:2008

Contact datacenters@chil-pak.com to learn more about how your colocation facility can take advantage of Chil-Pak's modular chilled water plants.

One of the chief characteristics of a disruptive technology is that it completely changes the way things are done. As a manufacturer of packaged central plants Chil-Pak has helped to revolutionize the way central plants are built. Rather than spend months having a central plant built-up on a construction site, Chil-Pak provides factory built modular central plants ranging in size from 180 tons-7500tons+. These plants can be completely constructed offsite and then deployed when needed. In addition to the quality control aspect of these central plants they typically provide end users with a 10-15% CAPEX savings when compared to a built up plant.

Chil-Pak has designed and deployed these modular central plants throughout the world form North America to the Middle East.

If you have an upcoming project that requires chilled water be sure to touch base with the Chil-Pak team early in the process, so that they can provide valuable design assistance. For more information contact info@chil-pak.com

One of the best ways to describe what Chil-Pak does is to talk in terms of functional system requirements being translated into a modular piece of equipment that can be shipped down the road. The Chil-Pak design assist team works with engineers, owners, and contractors to ensure that the required functionality needed on an application is delivered in a quality piece of equipment. The Chil-Pak team has been involved in hundreds of central plant projects over the years and has the experience and knowledge that engineers are looking for in a manufacturer. To be sure there are other competitors in the marketplace, but many of these have come out of the small pumping package world and have tried to scale up to the complexity of a modular central plant. The Chil-Pak team is different in that they come out of the built up central plant world and just over ten years ago began manufacturing the central plants into modular pieces of equipment. The Chil-Pak solutions are idea for schools, resorts, office buildings, data centers, and other applications that have a large cooling load.

The majority of companies make some sort of claim to having integrity either in their goals, values, or tucked away somewhere in their mission statement. In light of this flippant attitude that is taken toward integrity, why would Chil-Pak make the statement "Providing Packaged Central Plants with Integrity"?

This is dramatically different form the way in which Chil-Pak desires to conduct business. When we build a job or work with a client on a design build project we make sure that we can meet the projected deadlines. If this means, we have to walk away from a job because the deadlines being asked for are not possible then we will. That being said, Chil-Pak has found over the years that our reputation to deliver on time is well known in the marketplace. When Chil-Pak provides a production & delivery schedule to their clients they can rest assured that this will take place. This showing up on time is simply one part of what it means to deliver packaged central plants with integrity.

If you are looking for a packaged plant manufacturer who shows up on time, finishes what they start, does what they say, and really values integrity then Chil-Pak could be a valuable member of your design build team. Contact info@chil-pak.com for more information

As a manufacturer of packaged central plants, Chil-Pak, has had the opportunity to be involved in multiple vertical markets. In the last few years their involvement has expanded to the data center industry. One of the interesting things about the data center industry is that there has been a big push to create modular solutions. These modular solutions typically provide owners with the ability to defer capital and build as they grow, rather than tying up capital in unoccupied white space or support infrastructure. These modular designs also provide the data center users with design flexibility and an increased speed of deployment. All of these benefits of modularity that the data center industry is now embracing, have been championed by Chil-Pak for the last ten years. In short, this means that Chil-Pak understands, embraces, and has experience in working with clients to optimize their modular chilled water infrastructure. We recently caught up with Chil-Pak's Director of Strategy & Mission Critical solutions, Harold Simmons, and asked him about the modularity phenomenon in the data center industry:

Modular designs are nothing new. In fact the argument can be made that the industrial revolution was in part fueled not only by standardization but by a passion for modularity…..The technology industry has actually always been a big advocate of modular systems as evidenced by personal computers and the like. This embracing of modularity has simply been extended to the data center and the supporting infrastructure. Chil-Pak has played a significant role in putting modularity theory into practice by helping some of the world’s largest companies to simplify their cooling infrastructure by providing modular chilled water plants. The systems are much like a traditional built up plant in that they include pumps, piping, VFD’s, chillers, controls, etc; however, the main differences have to do with the flexible design, speed of deployability, reduced capital expense, and the opportunity for the central plant to be built in a quality controlled ISO 9001:2008 factory environment.

If you and/or your company are intersted in learning more about how Chil-Pak can provide your data centers with a modular central plant ranging in size from 180 tons to 7500+ tons then contact datacenters@chil-pak.com and reference this article.

The Chil-Pak team had the opportunity to assist with an energy efficient cooling strategy for a school project in Florida. Chil-Pak manufactured and helped design a 540 ton packaged chilled water plant for the educational facility. The packaged chilled water plant was part of a solution that included a dual mode ice storage. The system took advantage of lower electricity rates in the evening period to create ice, so that this could in turn be used to assist with the cooling load during the peak demand period.

If you are interested in applying Chil-Pak's cost saving packaged chilled water plants in your district contact info@chil-pak.com

Chil-Pak has made an official announcement today regarding their new line of standardized solutions. The new line of packaged chilled water plants (i.e. modular chilled water plants) builds on years of design experience of hundreds of central plants. The new standardized product will be known as the MARK series. The rationale behind maintaining the MARK series nomencalture was explained by Harold Simmons, Global Director of Strategy:

"After wrestling through various names for the new standardized product line, Chil-Pak decided to build on the already strong reputation of the MARK tradename. The MARK series has always been about meeting the clients needs with an off the shelf packaged central plant design and it is our intention to continue the tradition with the new MARK product offerings. One of the biggest improvements to the new family of products is that now we are able to provide up to 800 tons of cooling in a single module with a standardized form factor. While Chil-Pak will continue to provide solutions to our clients with larger cooling needs of up to 6000+ tons, the MARK series is a tangible solutions for our cleitns who have a smaller load, but desire to take advantage of the convenience and cost savings of a modular chilled water plant."

To learn more about how the Chil-Pak team can provide your organization with a high quality packaged chilled water plant contact info@chil-pak.com

As one of the industry's leading engineering integrators and manufacturers Chil-Pak has made it a practice to implement advanced technology into their systems. This has been seen most recently in their designs that include Combined Cooling Heating and Power (CCHP) as part of an overall solution.

To Learn more about how your company's future data centers can take advantage of this technology in a modular fully integrated solutions contact hsiimons@chil-pak.com